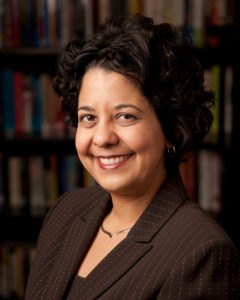 Erica Flores Baltodano has over 20 years of experience as an attorney and policy advocate in the areas of civil rights, environmental justice, and employment law.  After practicing law and doing policy advocacy for a decade in Los Angeles, Ms. Baltodano relocated to the Central Coast of California in 2010 and became Managing Partner of Baltodano & Baltodano LLP, a plaintiff-side employment law firm she founded with her law partner husband.  In November 2017, Ms. Baltodano’s law partner became a California State Superior Court Judge (now a California Justice with the Second District Court of Appeal) and Ms. Baltodano became President of The Baltodano Firm, A Professional Corporation.  In 2019 Ms. Baltodano became the appointed District 3 Civil Service Commissioner for the County of San Luis Obispo and was reappointed in 2021. She also joined the faculty of San Luis Obispo College of Law in 2019 where she taught constitutional law and voting rights and now serves Campus Dean.  She is the Immediate Past President of the San Luis Obispo Legal Assistance Foundation Board of Directors and is a Board Member of the San Luis Coastal Education Foundation, among others.  In January 2017 Ms. Baltodano delivered the keynote address at the First Annual Women’s March in San Luis Obispo; in February 2018 she was recognized by the San Luis Obispo County Commission on the Status of Women; in March 2019 she received the 2018 Outstanding Woman Lawyer Award from the Women Lawyers Association of San Luis Obispo County; and in 2021 she was awarded the prestigious John L. Seitz Award by the San Luis Obispo Bar Association in recognition for her outstanding community service benefiting the residents of SLO County.

Ms. Baltodano began her legal career at the Center for Law in the Public Interest, one of the nation’s first public interest law firms, advocating on behalf of economically disadvantaged and traditionally under-served children and communities. A recipient of a Selected Professions Fellowship from the American Association of University Women Educational Foundation and Minority Fellowship in Environmental Law from the American Bar Association and the State Bar of California, Ms. Baltodano focused her initial professional work on cutting-edge environmental justice and civil rights issues. After just a few short years of practice, Ms. Baltodano assumed the role of Assistant Director and Counsel at the Center for Law in the Public Interest where her work helped to shape, guide, and manage the legal and policy work of The City Project.

At the City Project, which spun-off and became a stand-alone legal non-profit organization, Ms. Baltodano influenced the investment of billions of dollars in public resources (parks, schools, beaches, transportation) to enhance human health and the environment and promote equality and economic vitality for all communities.  The Smithsonian’s Anacostia Community Museum published an article about Ms. Baltodano’s early career and ongoing civil rights advocacy in 2018, available here.

In 2010, Ms. Baltodano co-founded and served as managing partner of Baltodano & Baltodano LLP, The Baltodano Firm’s predecessor employment law firm on the Central Coast for seven years, receiving the Access to Justice Advocate award from San Luis Obispo Legal Assistance Foundation in 2017 and recovering tens of millions of dollars on behalf of individual and class member employment law clients.

Today, Ms. Baltodano builds upon a rich history of litigation and social justice advocacy at The Baltodano Firm, A Professional Corporation. She remains committed to positively impacting the lives of employees, and the community more broadly, through legal advice and counsel, advocacy, and education.  See below for details regarding Ms. Baltodano’s Board Memberships, Community Engagement, Awards, Publications, and Public Speaking and Teaching Engagements.

Since 2023, Erica Flores Baltodano has served as Campus Dean of San Luis Obispo College of Law (SLOCL), one of four campuses that make up the Monterey College of Law’s family of non-profit, California Accredited Law Schools.  SLOCL courses are taught in the evenings by practicing attorneys and bench officers who help produce the next generation of San Luis Obispo-based attorneys. Ms. Baltodano joined the faculty at SLOCL in 2019 and has taught courses on Constitutional Law and Voting Rights.

Ms. Baltodano has been widely recognized for her steadfast commitment to service and education in our community, most recently receiving the prestigious 2022 John L. Seitz Award from the San Luis Obispo County Bar Association for her significant contributions to the the community.  In March 2019, she received the 2018 Outstanding Woman Lawyer Award from the Women Lawyers Association of San Luis Obispo County for her active promotion of the advancement of women in the legal profession and in the community.  In 2018, Ms. Baltodano was honored by the San Luis Obispo County Commission on the Status of Women for her exemplary contributions toward bettering the lives of others through hours of invaluable service to the community.  On account of her lifelong work for social justice, environmental justice, and workers’ rights, Women’s March San Luis Obispo invited Ms. Baltodano to deliver the keynote address at its First Annual Women’s March in January 2017.

Ms. Baltodano joined the Board of Directors of San Luis Obispo Legal Assistance Foundation (SLOLAF) in 2017 and served as Board President from 2019-2022.  SLOLAF provides free legal services to San Luis Obispo County seniors, veterans, and families in need.  Under her leadership, SLOLAF more than quadrupled its budget, staff, and program offerings.

In addition, Ms. Baltodano has served as an adviser to the Superintendent of San Luis Coastal Unified School District (SLCUSD) since 2017 as a member of the Common Ground Advisory Task Force, which makes recommendations for school district programs, policies, and practices that foster civil discourse and improve school conditions, with an emphasis on equity and inclusivity.

In 2018 Ms. Baltodano became a founding board member of San Luis Coastal Education Foundation, which partners with the private and public sector to support creative and innovative programs to enrich and provide equitable opportunities for San Luis Coastal students across the District since 2018.  As a board member, Ms. Baltodano took a leadership role in establishing the Education Foundation’s School Closure Fund, which raised close to $150,000 from community members to support San Luis Coastal Unified School District’s most vulnerable students impacted by COVID-19 so that they could continue to learn through distance learning. She is currently working on expanding the Foundations short and long-term efforts to remove barriers to access to higher education and she chairs the Grants & Civic Organization Sub-Committee.

Consistent with her passion for education, Ms. Baltodano has facilitated field trips and conducted related civic lessons for local elementary school children, including visits to City Hall and the City Council chambers, the SLO County Government Building, and SLO County Superior Court.  She is also a frequent speaker in elementary, high school, and university classrooms, as detailed under the Speaking & Teaching Engagements section below.

In November 2017, Ms. Baltodano’s law partner husband was appointed by the Governor of the State of California to become a Superior Court Judge.  Although he was appointed after nearly a year of intense state-wide vetting, the timing of his appointment also required him to run for election in June 2018.  Ms. Baltodano served as Campaign Manager for the campaign to Elect Judge Baltodano 2018, ensuring a landslide 65-35 victory for her husband who now serves as the only local Superior Court Judge to be both appointed and campaign-elected.  Ms. Baltodano has since served as an advisor to other local and statewide judicial and political campaigns, including State Assembly, City Council, and School Board.  Judge Baltodano was elevated to the Second District California Court of Appeal, Division 6, in August 2022.

In 2021, Ms. Baltodano joined the board of directors of the Central Coast Cal Alumni Association.  She has previously served as a board member for the organization formally known as the San Fernando Valley Girl Scout Council, Casa Cardenas (a San Gabriel Valley-based organization that provides mental health services to Latinos), San Luis Obispo MOMS Club (Moms Offering Moms Support), and UMCC preschool in San Luis Obispo. In 2015-2017, Ms. Baltodano served as co-chair of a successful fundraising campaign for a local PTA.  Ms. Baltodano attributes her passion for community service to her service-oriented parents and over ten years as a youth member of Girl Scouts USA.

A generous supporter of several local non-profit organizations and schools, Ms. Baltodano is proud to contribute toward the work of those who make our community a safer, happier, healthier, and more compassionate place for all.

In 2016, Ms. Baltodano was awarded the Frank J. Pentangelo Award for her creative contributions to the San Luis Obispo County Bar Association’s Bar Bulletin.  In an 11-part series of essays called Mommy Esquire, Ms. Baltodano merges lessons in the law with lessons in parenting and explores issues of race, gender, and inequality.  The series creatively draws upon her experience as a parent, attorney, business owner, and woman of color.

In addition, Ms. Baltodano was the keynote speaker at the January 2017 First Annual Women’s March in San Luis Obispo, which attracted 10,000 participants. Ms. Baltodano spoke passionately as the daughter of a Mexican-American father and Jewish immigrant mother, small business owner, attorney, mother, and advocate for workers’ rights, social justice, and environmental justice about the need for women and their allies to join together in all our diversity and refuse to be reduced, commit to being assertive, and pledge to remain engaged in the local, state, and federal decision-making process. Ms. Baltodano said “Our diversity, our strength in numbers, and our very humanity will be our force and our power,” inspiring participants to be examples of peace and role models of success, and reminding everyone to “educate ourselves and our children and be teachers when necessary and students always.”

Additional speaking and teaching engagements by Erica Flores Baltodano include: